That’s the statistic I’ve seen.  1 in 4.  1 out of every 4 women has experienced pregnancy and/or infant loss.

How many women do you pass each day? Walking through Target, doing your grocery shopping, milling around the park.

And, supposedly, every fourth woman has gotten a positive pregnancy test, but has no innocent face to show for it.  There’s a hole. An unfinished story.  A life that barely started.  And in her heart, there is a raw wound that will never fully heal.

Thirteen weeks into a surprise pregnancy, I laid back onto the table.  The ultrasound wand searched for the sound.  But there was none.  Where there should have been a wiggly baby, there was a still child.  Too still. My firstborn son was gone.  I grasped at my husband’s chest.  And I wept.

Eighteen weeks into my pregnancy, I was counting down the days until the 20 week ultrasound.  It was scheduled.  I was in maternity clothes and had a beautiful round bump.  Deep down, I knew this one was a boy.  I was thrilled.  One chilly, wet morning in March, I sat on the bed and laid back.  The Doppler wand searched for that sound.  It was silent.  I prayed aloud, begging God in broken sobs, “Please not again.  Please, please not again.”  In came the ultrasound.  Where there should have been another wiggling boy, there was a still child.  My second son was gone.

There was a third child, lost too soon.  Immediately, really.  I never saw her on the ultrasounds.  I hardly knew she was there before she was gone.

I am the one.  Yet I have broken into a million pieces.

Somewhere along the roads of grieving each of those lives, there was some sort of silent pat on the head, or not so silent when some told me to just get over it.  A silent pat, and societal pressure to not talk about them.  To not mention they were here and then gone.  People don’t talk about miscarriage. We don’t talk about stillbirth or infant loss.  We grieve quietly and then pretend to get over it. Like we don’t have a raw, beautiful wound for every person we gave up too soon.

What if I don’t want to be quiet?  What if we didn’t have to be  quiet?

“Name him!  Give him a name.  And when you do, please tell me. He was your son. He is your son  I want to do a burial service.” And my sweet Irish priest did.  I wept through John’s burial service. Out there in the veteran’s cemetery in Killeen, standing in that big pavilion with my husband and my daughter, who was much too young to understand what was going on. We stood there, and held each other up alone while we buried our John.  I prayed it wouldn’t happen again.

But it did. They came.  That wonderful family came.  The sons carried James’s casket.  The daughter sang beside his casket.  And we weren’t alone.  Their mother, my dear friend, stood next to me.  Her presence held me up as I buried another son.  I didn’t have to be quiet. I didn’t have to hide the pain and loss.  Because she wept with me.  So many wept with us.

I will never know why I’ve lost three babies.  And I know that I might lose more.  I could bury more of my babies.  But just because I never brought them home, just because their presences are not in my home, does not make them matter any less. My body has nourished seven lives.  I have cradled within me seven people.  I created seven souls.  Three of them sit at the feet of Jesus, praying for me.  I have buried two of them.  I have seen darkness and pain three times.  During one of those times, I saw firsthand the depths to which Christ will go to bring comfort. It’s a beautiful testament, and I’d love to share it.  But, at first, I kept quiet about it all.  I had to keep quiet for so long.  Because it was “just a miscarriage.”  I was supposed to endure it “silently.”

Look at those beautiful names. Of all the accomplishments I’ve achieved in my life, the greatest are them.  Even the ones you can’t see.  I’ve given life to this world and saints to the next.

Just like Elizabeth’s, Mary’s, Anne’s, and Joseph’s names are spoken within our home, so are John’s, James’s, and Josephine’s.  They are whispered at Mass, they are spoken occasionally within these walls.  Because they were here and they matter. 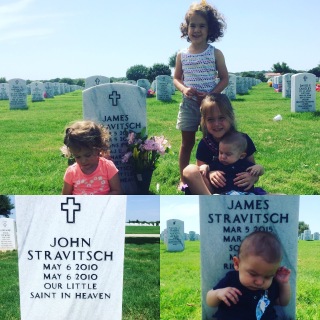