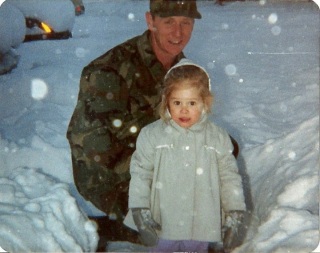 I didn’t grow up in one house on Main Street, USA.  I didn’t even do all of my growing up in the USA.  I didn’t go to just one school, attend one church.  I don’t have that “one bedroom I spent my whole childhood in.”  I didn’t have one consistent set of friends during my childhood years.

I lived in at least ten different homes.  I grew up in a small starter house in San Antonio, Texas, in a duplex in Fort Leavenworth, Kansas, and in Blackhawk Village in Seoul, South Korea.  I grew up in Italy, with Venice practically in my backyard.  Other places, too.  My family divides our chapters of memories based on our location at the time.  “Remember in Benning, how we….”  “Remember that time in Rucker….”

I said good-bye to friends, turned down achievements, accomplishments, coveted positions in school.  Because the Army was moving us again.  I spent weeks, and sometimes months, without my father.  I stood proudly by him when he received promotions.  I had a passport at the ripe age of ten.  My youngest sister was barely a year old when she first received one.

I lived behind barbed wire.  I learned at an early age that that piece of laminated paper was like my soul–I should never lose it.  I had my father’s social memorized for as long as I can remember.  His “last four.”

I proudly watched my father serve for 23 years in the United States Army, and what a fine officer he was.  With all the moving, leaving, hardship, and tears, it was at times such a tough life.  I said good-bye and lost touch with countless people.  I cried in high school when my best friend called me from his house for the last time.  I knew I’d likely never see him again.  The editor in chief of the school newspaper–“No, thank you.  I’m moving this summer.”  Ripped my heart out.  All the times I watched my father leave for days, weeks….months.  Wonder how my mother could stand sleeping in a bed alone.

I got the boot when I was a Senior in college.  I turned 24, and without any hesitation, the Army cut me off.  I had lost all military privileges, my healthcare, my ID card.  I felt totally lost.  The life in which I’d grown up–the comfort of barbed wire, the love of the Army family–I was now separated from it.  It was a huge transition for me.

And then I met him.  The man who stole my heart.

I did not realize initially that he was a Soldier.  Not at first.  But, I was so relieved to learn it.  When I realized that this was the man I would marry, I was so grateful he was active duty.  I was so excited that he was a United States Army Soldier.  I was so proud.  I can do this, I thought.

We now have three tiny girls of our own.  One has watched her father leave for war for a year, even before she knew what any of that could mean.  She screamed for her daddy as he walked away from us in the airport following R&R, wondering why he wouldn’t turn around and come back to her.  The other saw her Daddy for the first four days of her life, and then he left her.  Both have experienced four moves, four homes.  They are four and two years old.  This summer, they will say good-bye to their best friends next door.  And they will probably never see them again.

They will attend different schools–many schools.  They will turn down accomplishments, achievements, and honors.  And they, like their mother, will do it with a smile outside and a heavy heart inside.  They will carry that sorrow with them forever, but stand with pride that they did.  They will watch their father pin on new ranks, and stand proudly with tears in their eyes.  Because they get it.

They will again watch their father leave for war.  So will the youngest.  All three of them will stand there, wondering why he has to go, but still standing firmly for their Daddy.  They will cry at night, when no one hears.  They will push through, praying and hoping he comes home.  And, when they are old enough, they too will fear the door-bell ringing.

They know the comfort of barbed wire.  They will have their laminated paper soul.  Know their father’s “last four.”  They will divide chapters by location.  Know the bittersweet smell of cardboard and tape.  They will sit around, someday, and see who can remember the most telephone numbers or street addresses from their childhood.

And, despite the hardship, someday they’ll be grateful for this life. Because it made them better people.